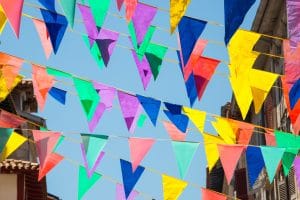 The Pecan Street Festival is celebrating it’s 37th year in Austin. It is one of the longest running arts, crafts, and music festivals in Texas. Since 2009, it has also been one of the environmentally friendly festivals in the nation. It aimed not only to be ‘green,’ but to bridge the gap between sustainability and entertainment. To do so, they have created a recycling program to minimize waste from the event. The portapotties are chemicial-free, and the generators use biodiesel fuel. Many of the vendors at the festival are considered themselves to be ‘green’ with solar power companies, native bird propagators, and local producers of food, drink, and artisan materials. Along with booths for buying food, drink, and art, there will also be live music throughout the festival. The Pecan Street Festival in a nonprofit organization that generates proceeds to go toward the preservation of Austin’s historic Sixth Street. Sixth Street was formerly named Pecan Street, and is Austin’s entertainment hub. The street features bars, art galleries, live music venues, upscale restaurants, and casual cafes. The street is central to many of Austin’s nationally famous festivals like SXSW and Austin City Limits. The Pecan Street Festival has been around for 37 years keeping art and music as a central focus for the city and the street. The festival is much like Austin, where it has something for everyone.

Dr. Carmona started Austin Prosthodontics with his expertise in complex oral and maxillofacial procedures, but he is just as passionate about helping families enjoy beautiful, healthy smiles for life through general dental services.  To schedule a consultation, call our office in Austin, TX, today at 512-250-9444. We also proudly welcome patients from Cedar Park, Round Rock, Pflugerville, Leander, and all surrounding Texas communities.