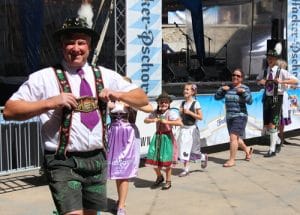 In 1852, German settlers in Austin formed a traditional singing group. Over twenty years later, the group officially organized as a singing society bearing the name “Saengerrunde”. The Saengerrunde is the oldest ethnic organization in Austin. A favorite meeting place for Saengerrunde members was Scholz Garden, a beer garden established in 1867 by German immigrant August Scholz. The Austin Saengerrunde club purchased the facilities, which have continued to encourage members and guests to preserve and enjoy German heritage.

Food And Fun For The Family!

On May 13th, the Austin Saengerrunde will be holding their annual Maifest Celebration. Starting at noon, there will be lunch, bier (from Rentsch Brewing), and wein (from Ambiente Wine Importing) provided as the festivities begin. Members and guests are encouraged to bring appetizers and desserts to share. At 6pm, Dinner will be provided by the club including pork chops, brats, ribs, spaetzle, potato with onions, Rotkohl, green beans, and veggies. There will also be a concert and polka dancing from 7pm to 11pm. Tickets are $10 for members and $25 for non-members. Contact 512-266-SING for more information.

Our dentists offer a number of implant, restorative, and other dentistry options to give you a smile to celebrate. Contact us at our local Austin, TX office at 512-250-9444.